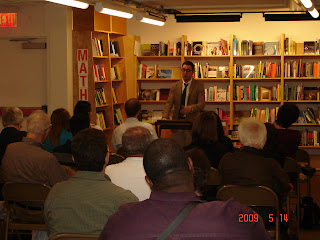 Law-abiding outlaws. Ferocious constitutionalists. Rational cutthroats. Peter Leeson spun tale after tale of early 18th century pirates at Reiter's Books on Wednesday evening, May 13, 2009. It wasn't the usual story. Peter Leeson is an economist at George Mason University and his book, The Invisible Hook,crisply sorts out the roiling contradictions of early piracy. Pirates, he said, organized their ventures and regulated their crews as profit maximizers, responding rationally to economic incentives. Pirate crews wrote and unanimously adopted constitutions that circumscribed powers of pirate captains, regulated the distribution of pirate booty, and compensated pirates injured on the job - all that more than half a century before the U.S Constitution. Were pirates social progressives? Atrgh! Leeson mines pirate chronicles to show how pirate antics were dryly clear-headed economic actors.

Located in the heart of our nation’s capital on the corner of 19th & G Street N.W., Reiter’s Books is a treasure for DC’s great minds and big thinkers. Established in 1936, Reiter’s is one of a few booksellers in the world that is focused on bringing scientific, medical and technical books directly to the community. From finance, economics, math and medicine to design, architecture, politics and policy, Reiter’s has what you’re looking for. We also carry Littmann Stethoscopes, Welch Allyn Diagnostic Sets and other pocket medical equipment and puzzles, games and toys for thinking children of all ages.

When you shop at an independently owned business, your entire community benefits. Buying local means less packaging, less transportation, and a smaller carbon footprint. Local retailers are your friends and neighbors—support them and they’ll support you. More independents means more choice, more diversity, and a truly unique community.